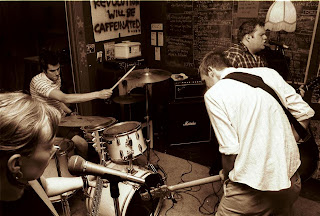 In 1999 I was hanging out with my friend Zachary Mull at a record store when he bought a book of tab for Springsteen songs.  As a politi-punk who only associated Springsteen with 80's jocks and Born in the USA (this was before Springsteen's come back mind you), I was at first confused but trusted Zach's expertise on the subject.  In the next few weeks WBS made me a few mixed tapes and I was way into it.  We started a Springsteen cover band (The Boss) with Krystal, Zach, and WBS.  I learned to play drums for the band and it was WBS and Krystal's first band.  The idea was to do it as newby's (except that we needed Zach's to hold it together).  We played one show of covers and then decided to become The Dirty Version and write original stuff.  We played for a couple years, hardly playing out at all, until Krystal and I moved to Pittsburgh.  It was a lot of fun; they are awesome people.  We recorded 2 demos, but I did an awful job recording the second one so I'll refrain from sharing it to spare us all the embarrassment.  But Zach has posted the first demo here and I've got to say that I like it more now than at the time, despite it's/our flaws.  You should also check out Zach's solo stuff (Romance Novels) and his defunct band, The Dawn Chorus.  He is a great songwriter, fo realz.  I also have a wonderful video of the disastrous Boss show and hope to one day get it from dvd to youtube or some shit.

Nothing planned, but get in touch if you are interested in booking me for a solo, acoustic set.

The more money we have, the better our records will sound and the more we'll release. So if you want to help us out, buy our stuff (or paypal us a gift to wwoodearr@gmail.com; we won't blow the money). That said, we've made efforts to keep our albums cheap.

CD
Electric Alone and Steeple Vultures CD's packaged in screen printed paper sleeves are available from us in person, Churchkey's Store, Chaz's Bull City Records, and School Kids Records. Your local indie record store can get Electric Alone if they don't already have it. The Hard Way is out of print.

Cassette
A limited number of Nothing in Return are available on cassette from GFR Tapes, Chaz's Bull City Records, Nice Price Books in Raleigh, Harvest Records in Asheville, or All Day Records in Carrboro. Nate Tarr or Nathan Golub can sell you a copy too. 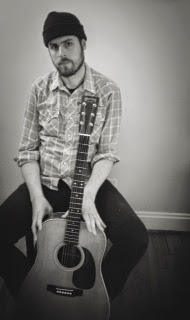